In my last post I had the great opportunity to talk to Summer, creator of Summer’s Secret Seasoning and also the creator of some great jams (which we’ll be talking about in the next post). If you haven’t yet read that interview and you’d like to, you can find it here.

During this portion, we’re going to take a look at Summer’s Secret Seasoning, which I have been taking for a test drive on many different foods over the past while. It’s been a lot of fun to do this and experiment.

As a disclaimer, I feel it’s important you know that I have not been compensated, nor will I be compensated in any way shape or form for this review, other than having the seasoning provided to me free of charge for this very purpose. What’s on the Label?

Summer’s Secret Seasoning comes in a heavy jar holding 4 oz of spice with a clear plastic seal around the lid. The seal itself was relatively simple to remove. The label design is simple and clean, and the lid sports a golden sticker relating a short introduction to her seasoning:

Summer moved to the USVI in ’96. Her passions are the sea, cooking, travel, champagne, & her husband. Influenced by the flavors from the US, Italy, the Islands and Spain, Summer created her seasoning mix and easy recipes for you to enjoy and share.

At the very left of the main wrap-around label is a silhouette of a lady (could it be Summer?) holding up the “shhh” finger to her lips. This is secret seasoning, after all. 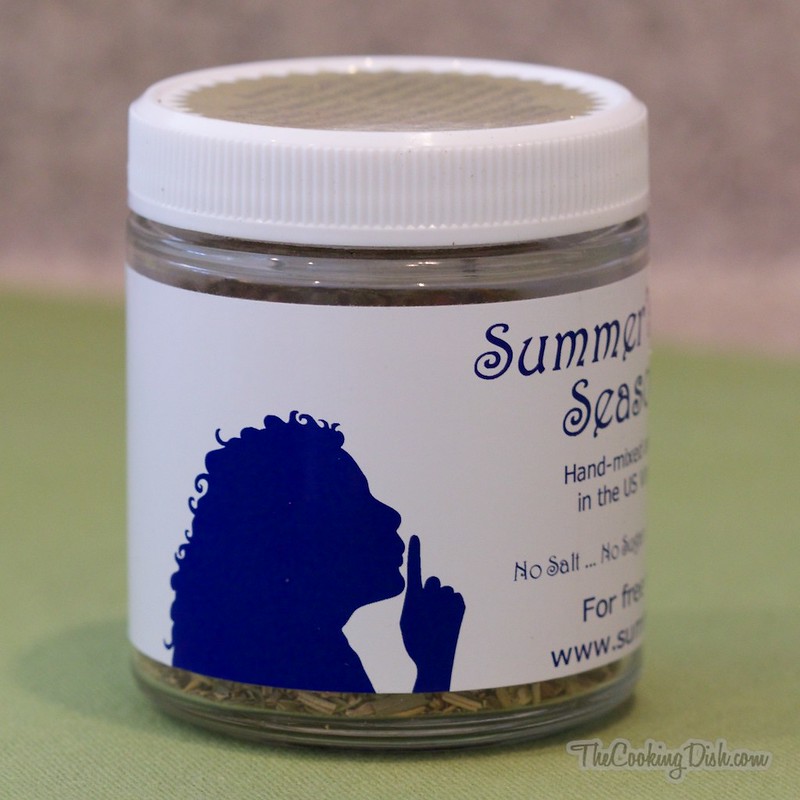 Here’s what we learn from the label:

We don’t learn anything about the nutritional value, as that’s not a requirement (to my knowledge) to add on spice containers.

What’s in the jar?

Okay, let’s move on to whats in the jar. As I opened it for the first time a savory menagerie of smells permeated the air, and as I took a few whiffs they filled my nostrils with delight. Seriously, though, this stuff smells amazing. Extra kudos for the aroma.

Here’s a closeup image of the spices inside the jar. 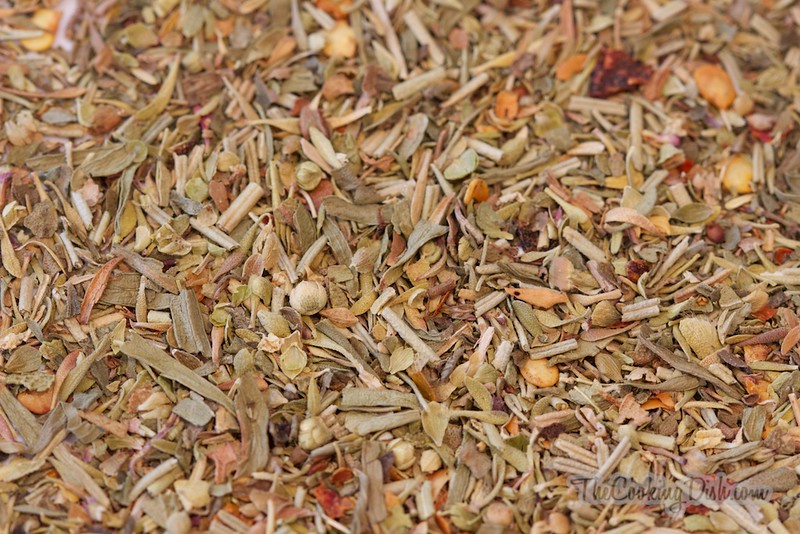 I’m not going to claim that I know what all the spices Summer is using in the seasoning mix, but at a glance I’d probably guess oregano, basil, thyme, red pepper, and rosemary—possibly some majorum and savory. There are also a few others in there that I don’t recognize right away, besides knowing everything that’s in a secret mixture doesn’t make it as fun and mysterious.

How does it taste?

This is always the hardest part of a review for me, especially since what tastes good from one day to another might change. However, I feel confident that I’ve used this on enough foods and over the course of enough days to have a pretty good idea of the overall taste and flavor.

As with all foods, I’ve always got to try them individually, a jar of spices is no different. This mixture contains enough flavors in it that it’s actually pretty fun to try a finger full all at once.

Immediately the heat of the pepper seeds flick the tongue, and then there’s a wave of savory which ends in an actually fairly intense bitterness. The bitterness should not be surprising, as quite a few spices when eaten raw have that effect. Overall, by itself it has a fairly good and wide range of flavors. It’s interesting and fun for the palette.

There’s a wide variety of foods that this spice goes well with, and then there are a few that don’t pair so well with it, in my opinion. At this point I have to offer an apology; I’ve been taking photos of the different foods I’ve paired with this seasoning but as I’m writing this post, I cannot find them anywhere. I’m more than bummed.

This spice pairs surprisingly well with most of your every day food items. Some of my favorites uses so far have been baking it into fresh breads and biscuits, seasoning for grilled chicken and sautéd pork, mixed with olive oil and used as a dip, lightly spread over a salad with fresh feta or goat cheese, and also as a seasoning on roasted or mashed potatoes. I also think it paired well with oil and cucumbers. 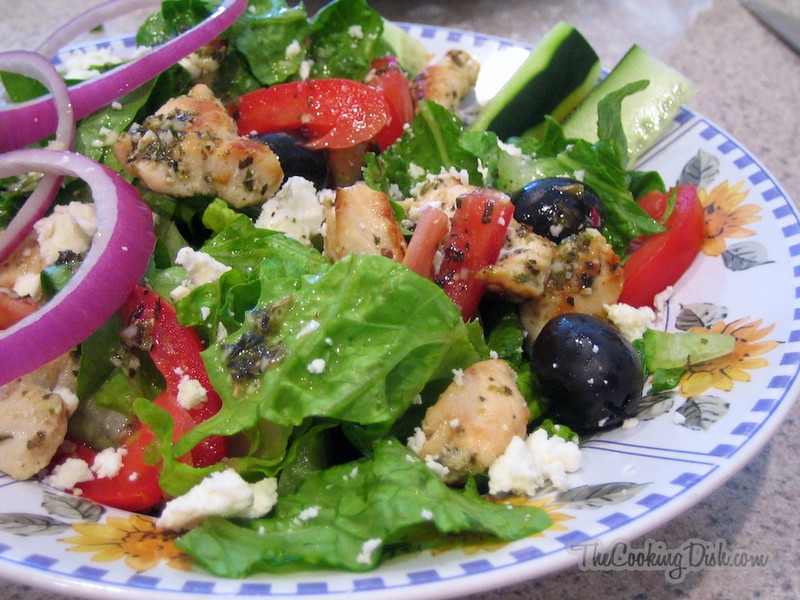 One of the first trials I took Summer’s Secret Seasoning on was with a simple garlic bread. Surprisingly I did not find it very enjoyable in this regard, rather it added too complicated of flavor to the bread and the spaghetti that I ate it with. On that same line of thought, I found that of all the dishes out there, it paired least well with pastas, which is something that I was not at all expecting. The pasta dishes that I tried out with this seasoning required a simpler, subtler flavor found mostly in the sauces and not in this spice.

I feel like this is a great seasoning to keep around in the kitchen. I’ve found myself reaching for it before the Italian Seasoning combo or even a few separate spices individually. There are two scenarios specifically where I used it more often than not: 1) when I was in a hurry, and 2) when I just wanted to add an extra oomph to my foods at dinner or lunch.

For people who are in a hurry and want to cook simple meals that taste good, this is the seasoning mix for you. It’s more complex than your regular seasoning mixes and adds a good over-arching flavor to most of your meals. It’s simple to take a pinch out of the jar or shake some into your palm. The jar’s mouth is wide enough that it’s also easy to fit your largest measuring spoon inside it.

On the flip side, whenever I wanted to spend more time on a meal or perfect the flavor of a picky dish, I couldn’t use this spice. The spectrum of flavor that this seasoning provides was too wide for those types of meals. Sometimes I also felt that because there are so many flavors in this one jar of spice that it competes against itself for attention. Such was the case when used on garlic bread and pastas. This spice is not recommended for picky cooks who believe subtlety and minimalism is the key to the perfect dish.

Overall, this seasoning gets a 7.5/10 from me. It’s one that I would recommend to many of the home cooks I know as a go-to seasoning for a wide variety of foods. I’ve been pleased with it overall. Thanks, Summer!

Stay tuned next week for a review of Summer’s Hot Pepper and Hot Mango jams.