At its most basic, the standard mirepoix (pronounced “mihr-PWAH” or “meer PWAH”) is a mixture of onions, carrots, and celery sautéed in butter. It’s used as an aromatic, flavorful addition to foods ranging from soups and sauces to braised meats and marinades. Chefs around the world also refer to it as “The Holy Trinity,” and it can be used in oh so many ways. 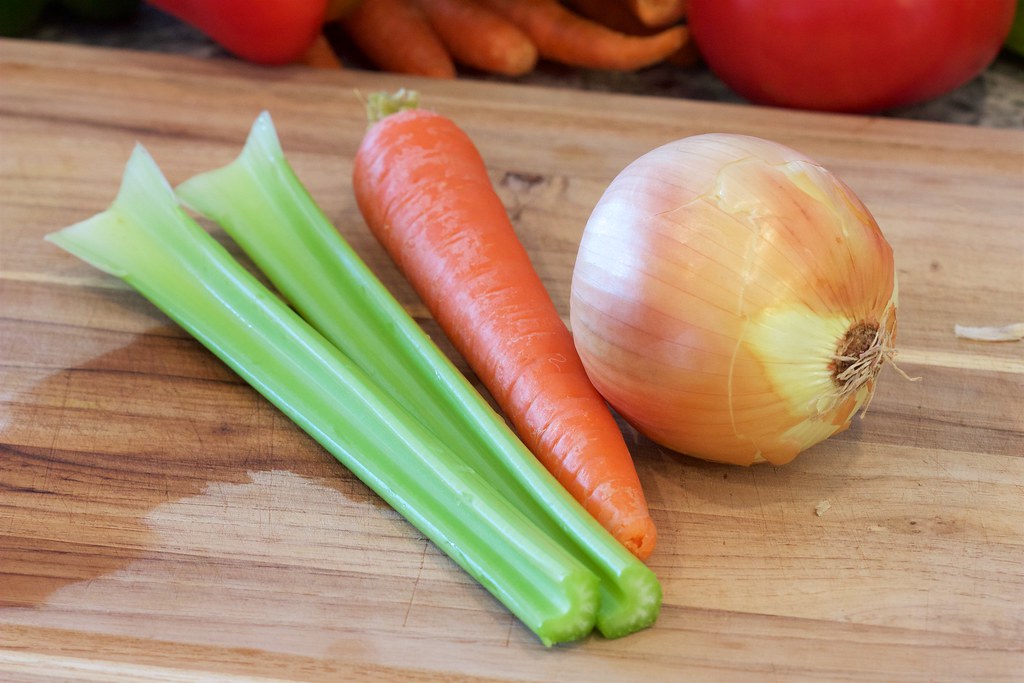 A common, quick way to cook mirepoix is to brown the onions and carrots together on medium-high heat (sauté) and then add the celery, cooking until soft. This develops a deeper flavor profile, and is especially delicious in soups. Again, you may choose another method depending on what you’re cooking. Any recipe that uses a mirepoix variation should give you specific instructions. If it doesn’t, assume the method above is used. 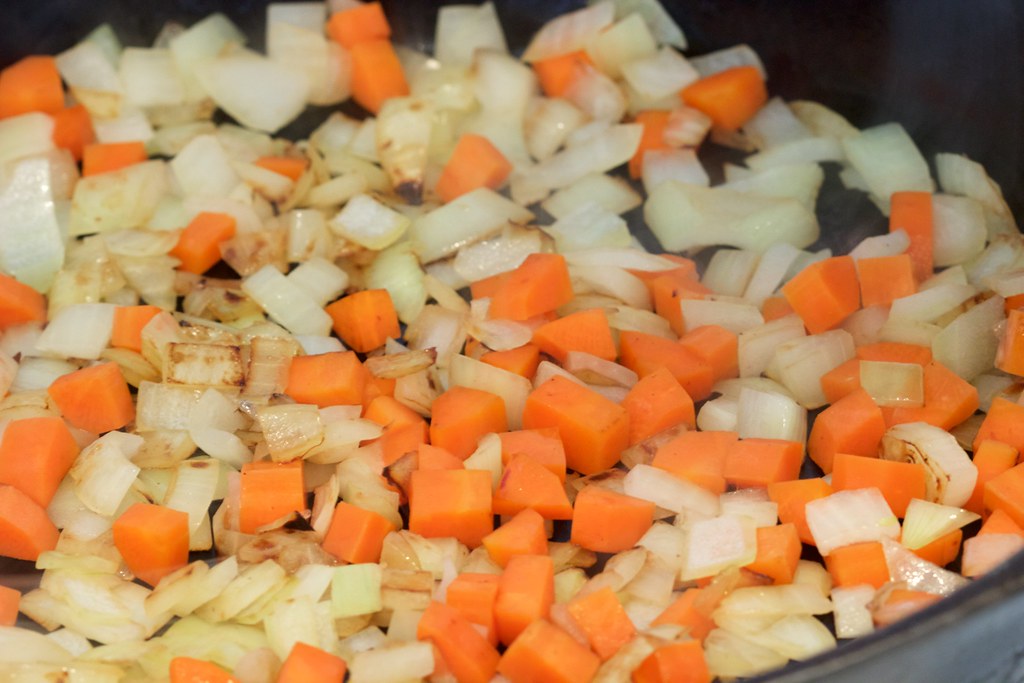 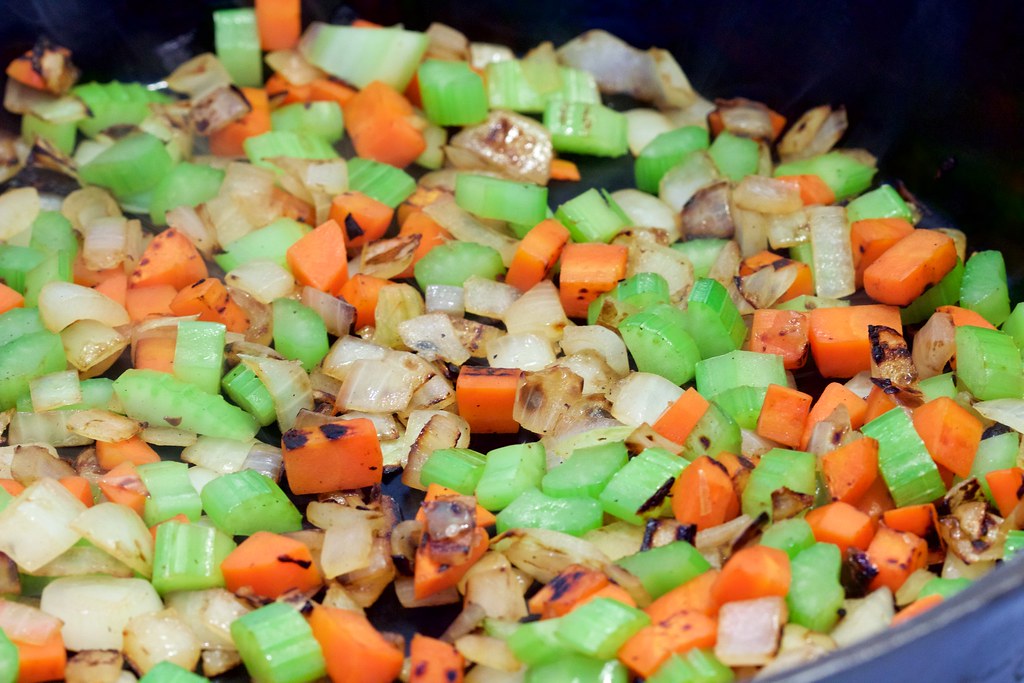 Determine the Size of Cut

Whatever the case, be at ease. Most recipes will tell you what to do. If not, do your best to think of the end dish and the result you want, and go from there. If it doesn’t work out, try again next time. 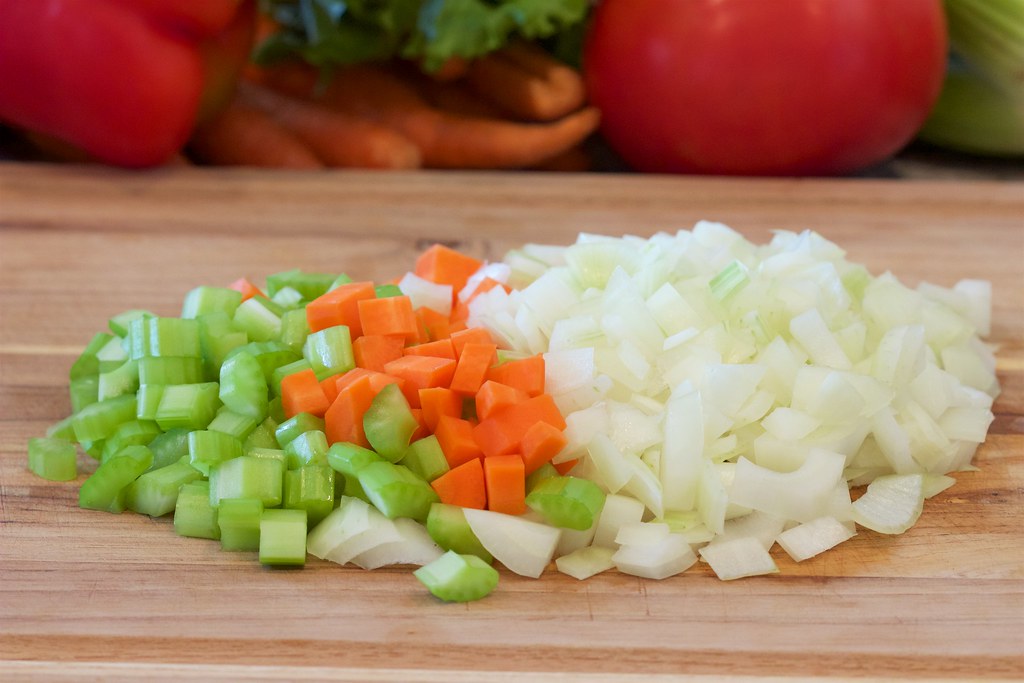 Most of the time I peel my carrots and onions when making a mirepoix, although it’s not always required (e.g. making a stock or roasting). If you don’t peel them, at least be sure to give them a nice scrubbing. Because I often include the mirepoix in my final dish, I like to peel them for looks if not anything else.

Some people claim that removing the peels from your vegetables also helps them impart their aromas more easily. I have no idea if that’s true or not and haven’t bothered to test it. Onion skins will add a tint of color to your food, so it’s up to you if you include them or not. (Along those lines, carrots will add an orange color to your food.)

Mirepoix is of French origin. I don’t speak French which means I often stumble over these darned foreign words. Sometimes I wonder how different the culinary world would be if the Germans had coined all our culinary phrases. Maybe there would be a lot more accidental spit in our food. Lame guttural spit jokes aside, I do love German food, and it’s not as if French is any easier for me.

Mirepoix has an interesting history. I’ll try to sum it up lickety-split.

Near France’s Southern border, there’s a small town named Mirepoix. Rewind the time back a few hundred years to the 18th century. In this town lived Gaston Pierre de Lévis, a rather ordinary man who was also known as the Duke of Mirepoix. Employed to the Duke was a skilled chef named _____. (For real, his name is unknown.) While historians are sure the Duke’s chef didn’t invent the aromatic mixture, it’s known that he was quite adept at using it. It’s surmised that he’s even the one responsible for making it popular.

As the story goes, the Duke in his great ordinariness needed to leave a legacy, but had nothing of his own to supply. So he did the next logical thing: name the Holy Trinity of foods after himself. I can only imagine Chef _____’s excitement. To this day the name remains, while its champion chef lies forgotten.

<– If you’re still reading in the voice of Morgan Freeman, you can stop now. –>

Go Forth and Conquer 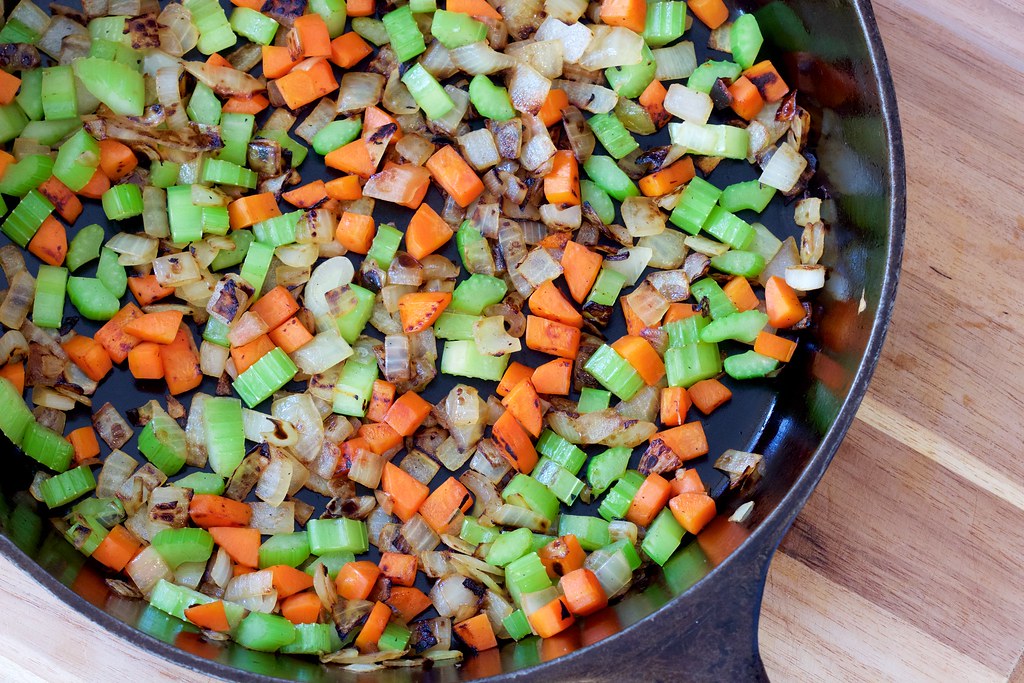 Now that you know and understand the basics of mirepoix, you’re capable of conquering the world. Keep your eyes and taste buds open when eating out, and you’ll notice it all over in the foods you order. The next time you’re cooking, take it for a spin, and it will liven up your soups, stews, meats, and sauces.