I’ve debated calling this recipe “Schroeder’s Ginger Tea” because I’ll be playing Schroeder in “You’re a Good Man, Charlie Brown” and it’s mostly singing. This typically wouldn’t be an issue, but my throat is still very sore and is still recovering from a long bout with bronchitis. With help of this ginger tea, though, I’ve finally given that dirty ol’ bronchitis the T.K.O. and am well on my way to a healthy, normal throat. I tried a lot of different remedies to help sooth my throat: lozenges, throat massages, a sea hag named Ursula (bad idea), etc., but nothing has come close to helping out more than drinking some warm ginger tea twice a day, and especially before singing. No more frogs, finally. (It’ll also help to keep yourself way hydrated by drinking maybe 2 liters of water each day. Your sore throat likes to stay hydrated.)

Sunday morning, I brewed a whole gallon of this tea because I want to be sure my voice is A-OK come performance day, and honestly, this has been doing wonders for me. I’m pretty sure Ginger Tea is a common recipe, and you can add lots of different spices and whatnot to it to change up the flavor, but I personally think ginger in the raw (with a little extra help from lemon and honey) is the best way to go for a sore throat.

You can probably find ginger root at your local grocery store. So, without further adieu, I present to you “Schroeder’s Ginger Tea” (que Beethoven’s 5th). As always, there’s a printable recipe at the bottom of this post.

**Update: Since posting this originally I’ve added an update (at the bottom). I think you’ll want to read it. 1. This is the hard part, so get ready. Pour 4 cups of water into a pot and bring it to a boil… Okay, hard part is over. The picture shows 2 cups, but I don’t have a 4-cup liquid measurer, so I poured two of these in instead. And I figured this was one step up from posting a picture of a pot with water… BORING. 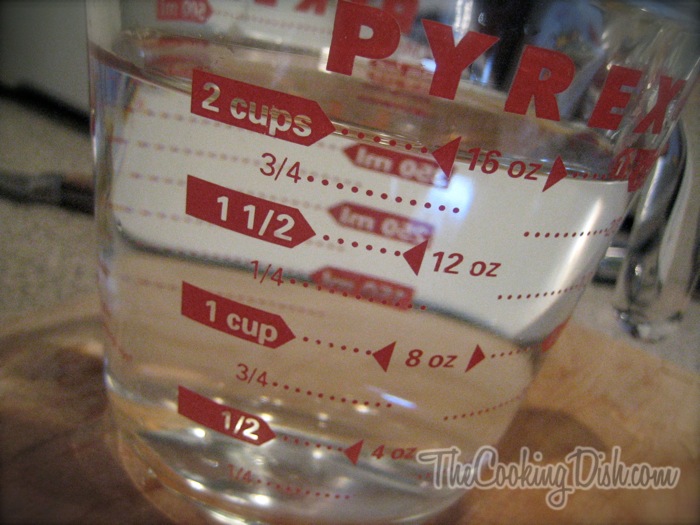 2.While the water is heating up, scrounge up some ginger root. 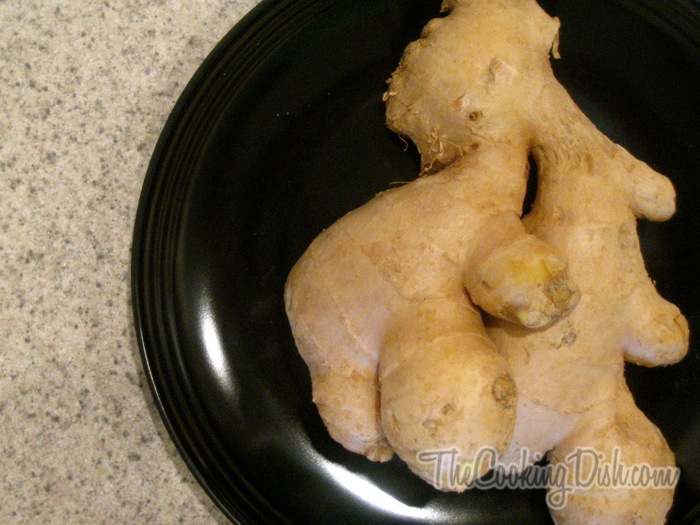 3. Cut a chunk of the ginger root off that’s about as large as your thumb. If you have a small thumb, then the piece you want is about 2″ long and 1″ wide. This piece doesn’t look like my thumb, more like my big toe, minus the hair. Oops, hope you didn’t lose your appetite there. 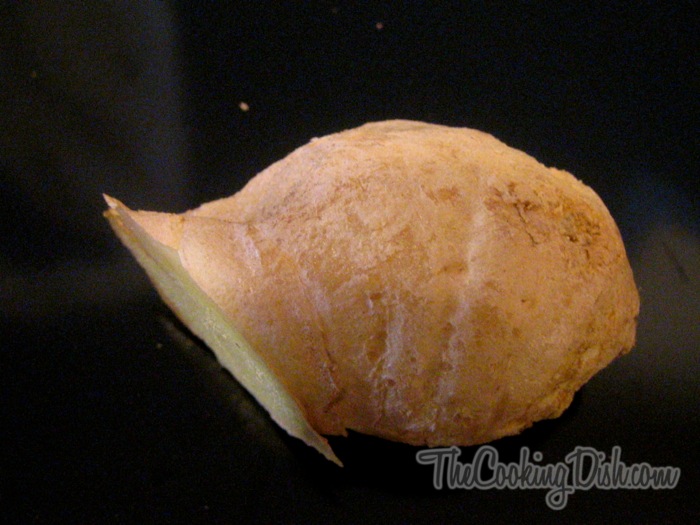 4. Peel the toe and then slice it into small pieces. 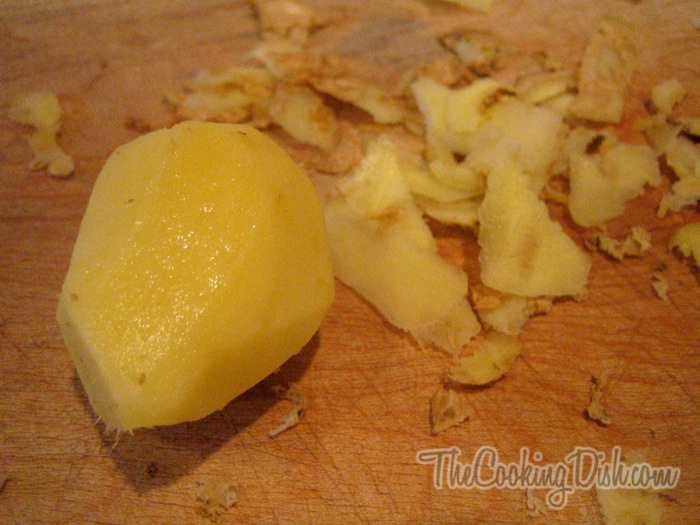 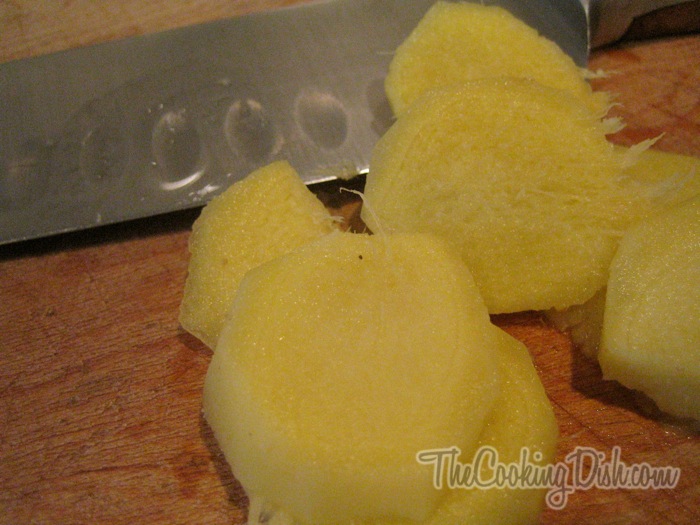 5. Add to boiling water, then reduce it down to a simmer. Once it’s simmering, cover the pot and let ‘er simmer for 15 minutes. 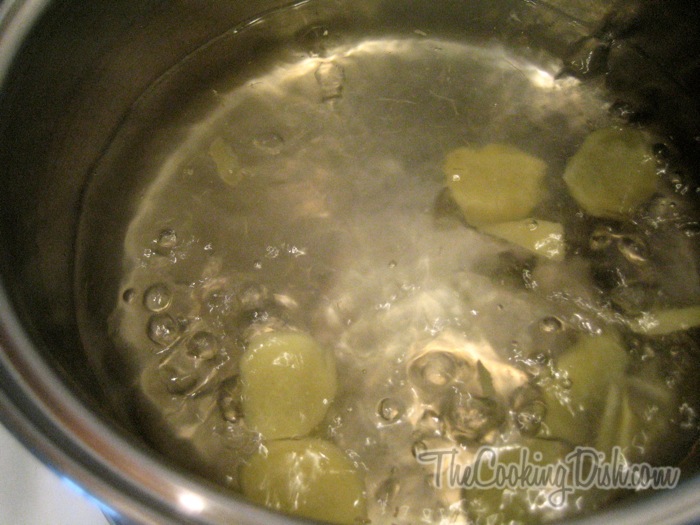 6. While that concoction is simmering, slice up a lemon. 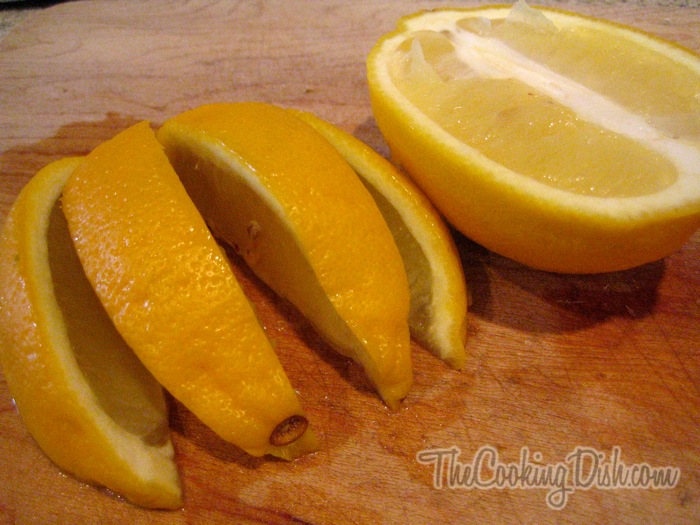 7. After the 15 minutes is up, remove the tea from the heat. At this point, you can either strain it first, or add the lemon and then strain it. For this post, I chose to strain it first, just to be thorough. But in the future, I think I’ll first remove the ginger chunks with a slotted spoon, then squeeze in two lemon slices (~1/4 lemon), and then strain it to avoid having to strain it twice (although that’s never hurt anybody, I think). But I’m getting ahead of myself. Strain the tea. 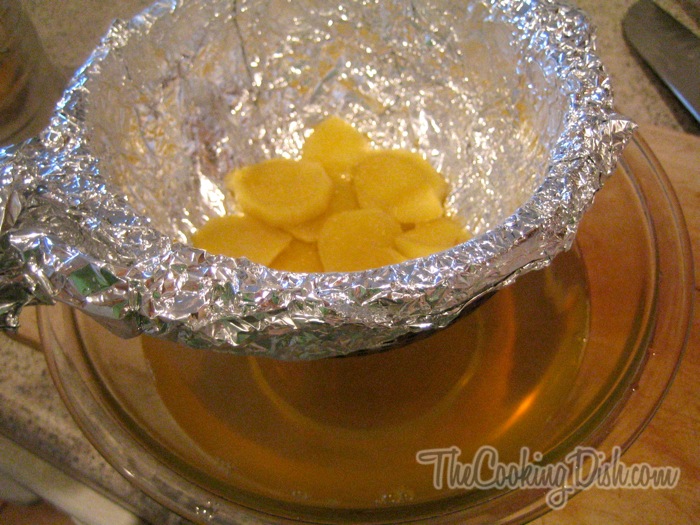 I’m sure you’re wondering what in the heck I used to strain my tea with. Well, mid-way through cooking my tea, I realized I don’t have a fine-hole strainer. So I quickly poked some tiny holes in some tinfoil with a toothpick and wrapped it around my large-holed noodle strainer. Tacky, but it worked like a charm. 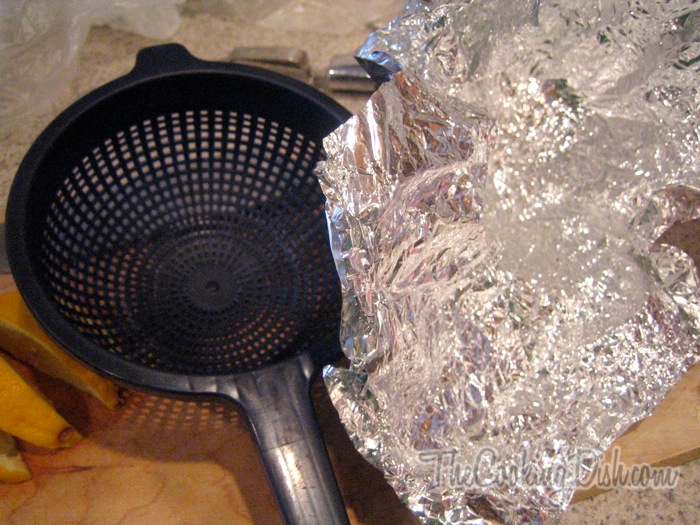 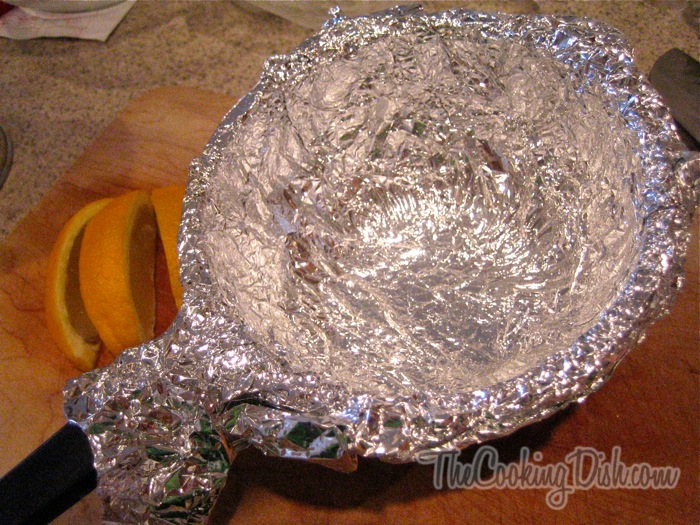 8. Now, squeeze the lemon. (What nice thumbnails you have, Chris!) 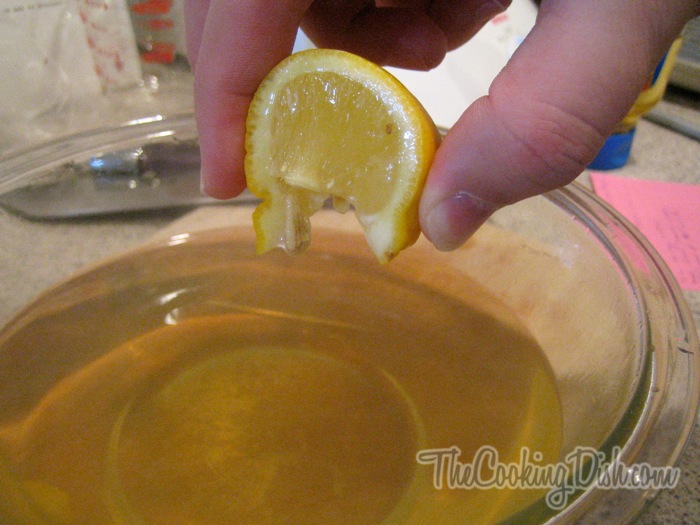 9. Add honey. I added 2 tablespoons, but add more or less to taste, just don’t over do it. 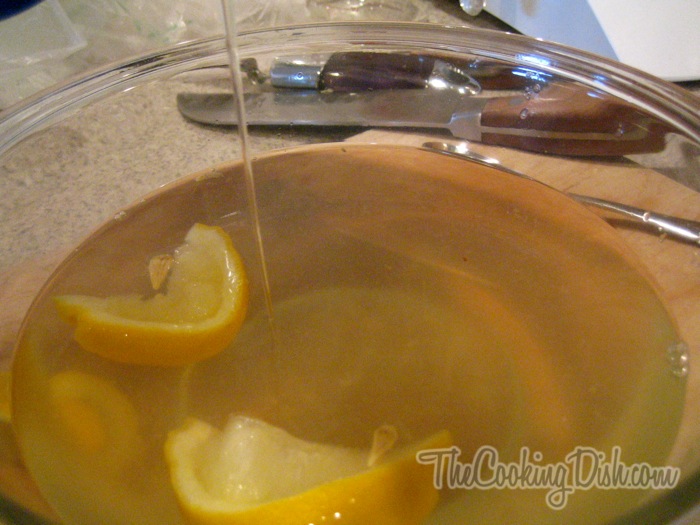 10. Stir until all the honey is dissolved… as can be seen in the picture… 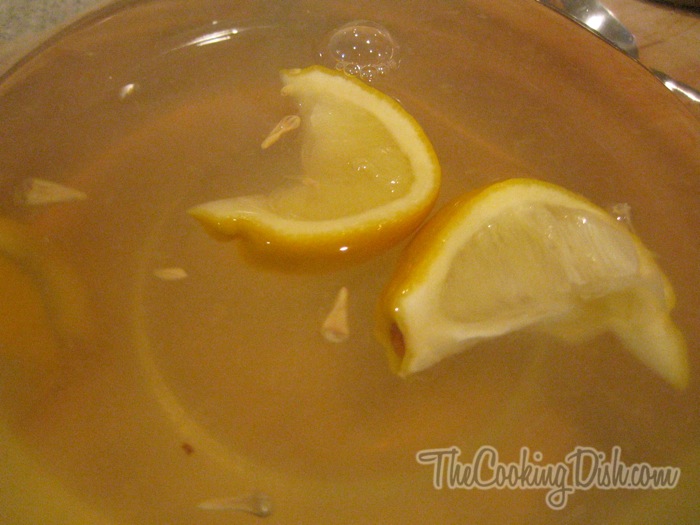 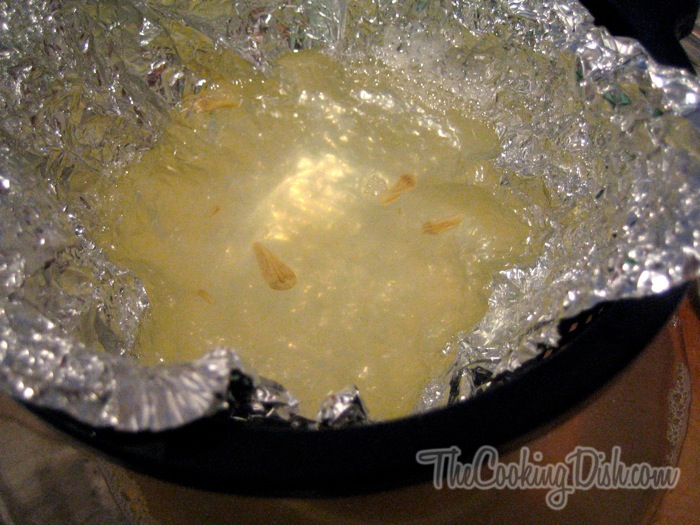 12. Pour it into your favorite mug, and drink it warm. 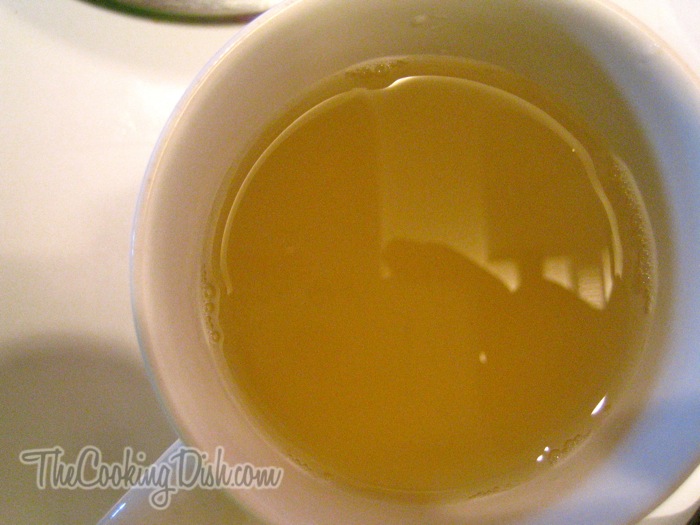 For some people, the ginger flavor can be overpowering. If needed you can add a little more water or boil the ginger root for only 10 minutes to help tame it’s crazy ginger flavor; remember though, it’s supposed to taste like ginger, or it’s not gonna’ work. You can also multiply all these ingredients by 4 to make a whole gallon. This helps if you’re in it for the long run.

A few people have told me that this is not pleasant to drink. No, it’s not. I should have put that caveat at the beginning of this post, oops. 🙂 The truth is, it’s not a pleasure tea, it’s a medicinal tea. I’ve tried different concentrations of ginger and found this concentration to be the most effective for me. It literally has saved my sore throat, I love it for that reason. But no, it’s not something you can just sip for enjoyment, unless you’re a ginger addict I guess.

Now that being said, I’m going to do some experimenting with this tea to see if I can still get the same effect when I add other ingredients such as mint, chamomile, star anise, cinnamon, chocolate, etc. etc. (just kidding about the chocolate).

If you have some further suggestions or if you’ve made some modifications to this recipe, please let me know in the comments below. Peace out! 🙂 Ginger Tea for a Sore Throat