Just the other week my family and I drove down to Mendon, UT for an enlightening introduction and tour of the creation processes behind the delicious Slide Ridge honey products. If you haven’t had the opportunity to taste their honey products, you’re missing out: especially the honey wine vinegar.

I ran into Slide Ridge earlier this year at the Honey Bee Festival in Salt Lake City, UT. As I walked by their booth, I was drawn in by the sweet smell of their vinegar samples. (I love cooking with vinegars as they can elevate a food’s flavor in remarkable ways.) Upon taking a couple shots of it–yes, shots of vinegar, ha!–I knew it was something special, and so I sort of invited myself up to their place. Luckily I was met with enthusiasm; apparently, I wasn’t the first to want to check out their digs.

Slide Ridge is nestled in a very quite area of a very quite (read: small and beautiful) town outside of Logan, UT. Being from the country myself, I found it quite easy to feel comfortable and welcome when we met with Martin James, one of the owners of the family-owned business.

Throughout our tour of the facilities, Martin was filled with enthusiasm, it was easy to see that he loves the bee business. He must, because he’s been at since he was only nine years old and doesn’t see himself anywhere else anytime soon. (I’m 31 and I still have no idea what I want to do.) It makes me happy when I meet someone who loves their career, as it seems to be a rare trait to have these days. 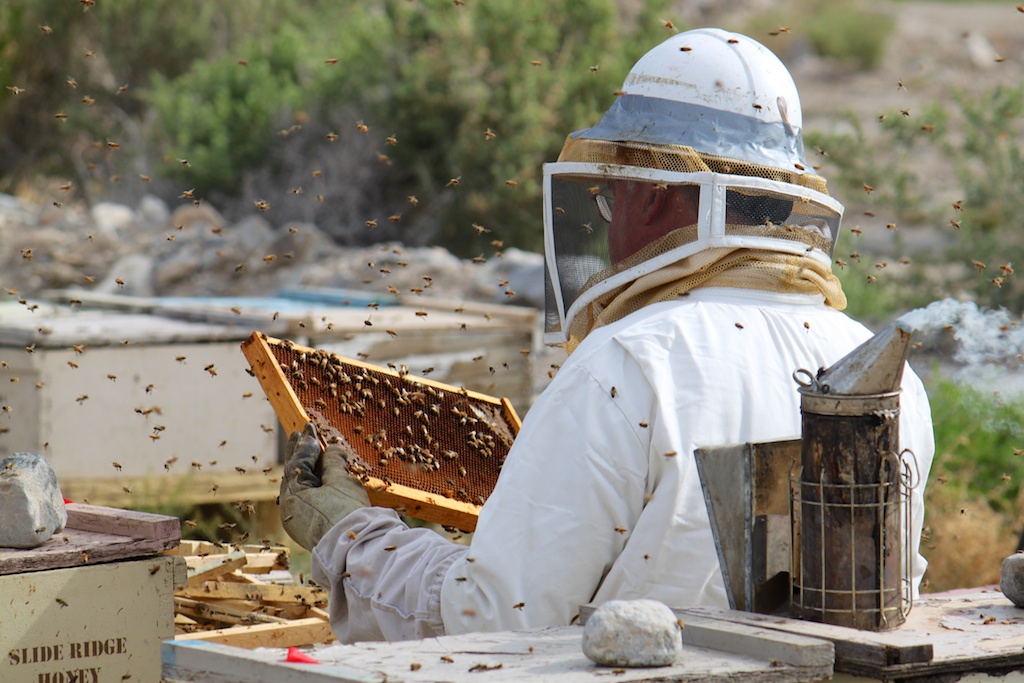 What I want to do is share some of Martin’s same enthusiasm and knowledge with you, so let’s go ahead and jump into some of the really cool things we learned from our Slide Ridge honey trip with Martin.

About Slide Ridge and Their Honey

Before any honey is extracted, they keep it in a hot room set at 95°F. This preps it and keeps it warm for the extraction processes. At this temperature, you can easily scrape it off the comb with a finger. Honey actually purifies at 118°F, but along with that purification, you lose the natural health benefits it has to offer, so Slide Ridge maintains it at 95°F so they don’t kill the probiotics. This means healthy natural honey for you! The collection and extraction process need to happen in the warmer months between June and August before moving the bees South for the winter. 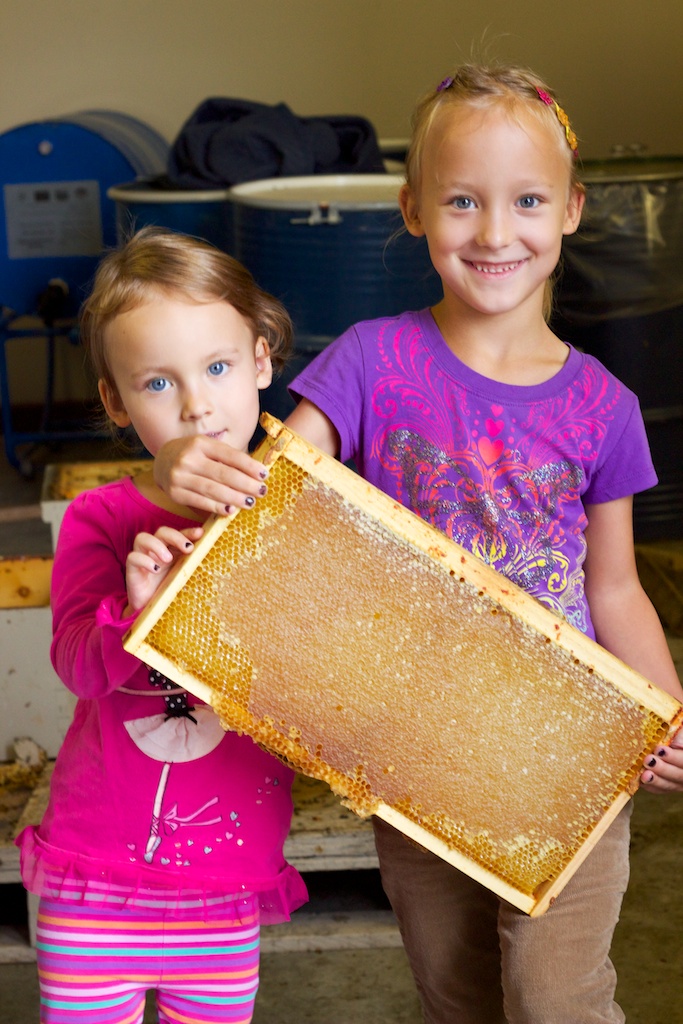 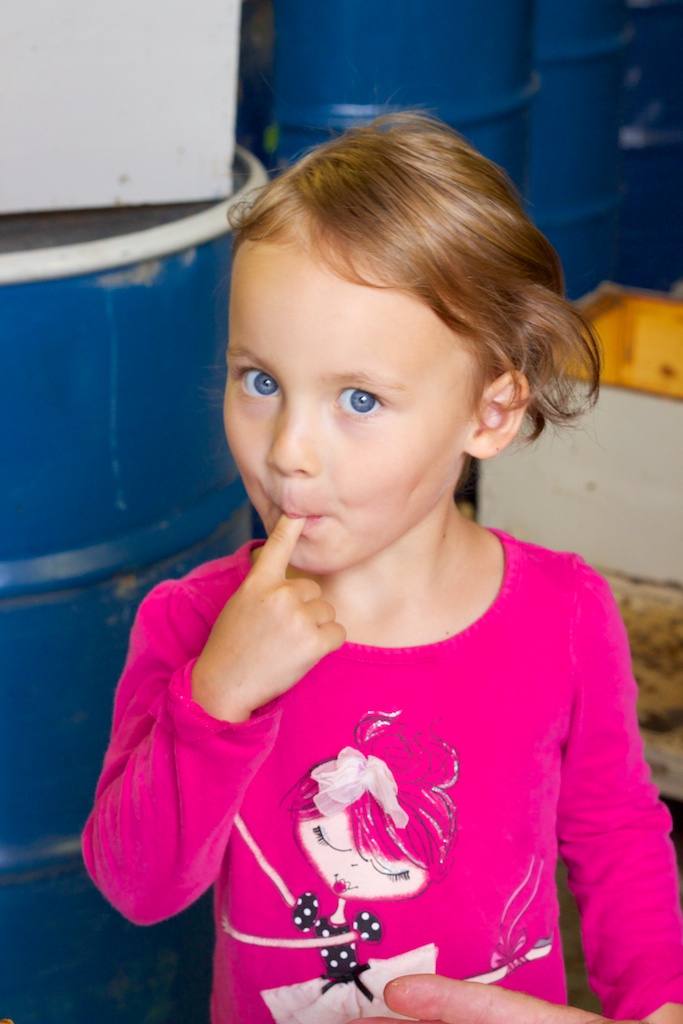 Slide Ridge has bee yards that extend from the Wasatch Back all the way to Park City. And while they’re not necessarily 100% organic (technically they might be, but controlling where bees pollinate is akin to herding cats, making it nearly impossible to certify it as organic), all their products are 100% natural. As a general idea, their bees gather pollen from plants and flowers across ~640,000 acres, all of which are herbicide, pesticide, and fungicide free.

During part of their process, we learned that they’ll take large honey comb slabs and quick freeze them to prevent moisture bubbles. These are used for food parties where it can be served alongside wine, cheese, and crackers, or other tasty vittles. Each frame holds 8 to 12 pounds of honey. (If you’re interested, they sell for $100/frame.)

And since we’re talking about poundage, did you know that it takes bees 8-12 pounds of honey to make 1 pound of wax (depending on the sugar content of the honey)? With that in mind, it’s much more productive to just remove the cap of honey (the extra honey along the edges of the frame) and let the bees reuse the comb instead of totally obliterating the frame each time and making the bees rebuild. The picture below is the frame right after the cap has been removed. The worker then scrapes the frame with a strong brush to loosen the honey before placing it in the centrifuge. 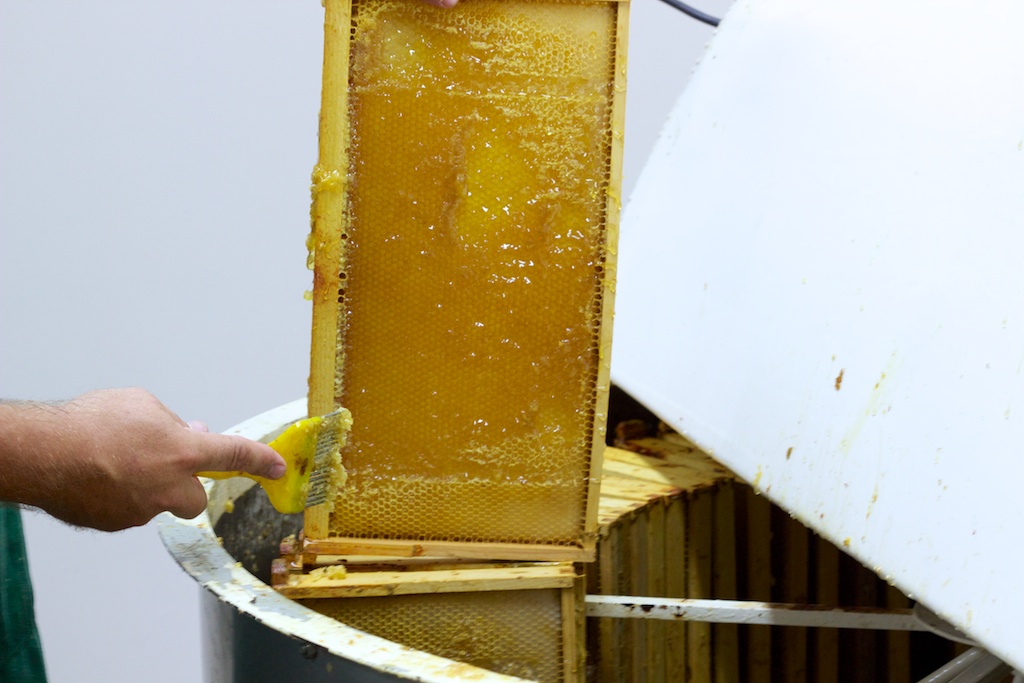 Extracting the honey is not the last part of the process, from there they have to ferment and convert it to mead and then to vinegar. Converting honey to vinegar is a difficult and touchy process. It took Slide Ridge 7 years to figure out how to make a high-quality version, but now they have it to where they can produce ~60 gallons (or 100 cases) of honey vinegar a day. As a fascinating side note, there are only a small handful of places (~4) in the world that are transforming honey into a quality vinegar.

As mentioned, as part of the process of converting honey to vinegar you wind up with mead (honey wine), add a little apple and you’ll make Cyser. Slide Ridge took advantage of this step in their process and also produce a high-quality wine called CaCysir. The ‘Ca’ stands for Cache County and the ‘Cysir’ is a play on Cyser. (You can read an interesting history of mead here. You can also read more about Slide Ridge’s wine here.)

While we were visiting, they were also experimenting with creating a berry wine vinegar using the Asian haskap plant which produces an elongated purple berry . We were able to sample some of their test batch and all I can say is that it might be some of the most delicious vinegar I’ve ever had (of course, their honey apple wine vinegar is amazing as well).

These are new fields of the haskap bush. 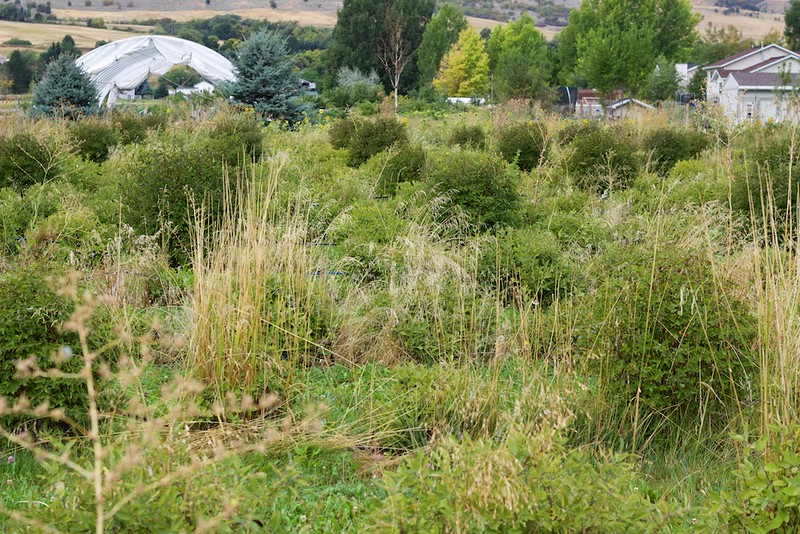 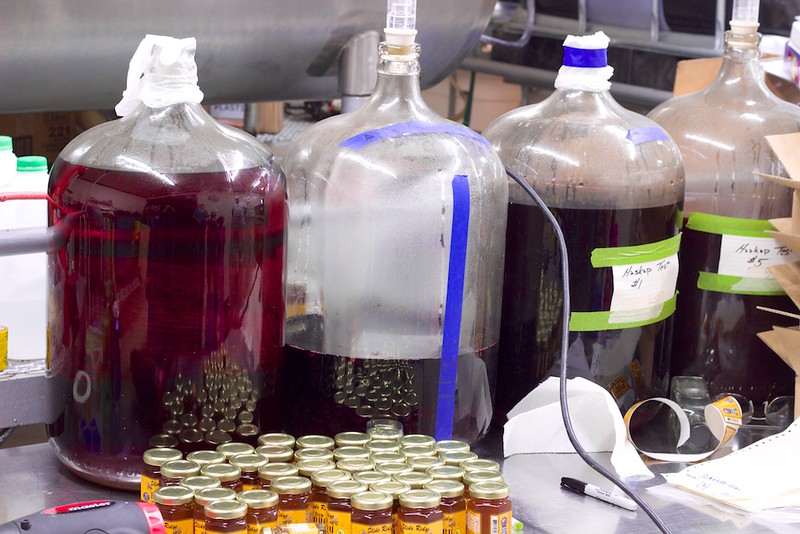 Here are some other interesting informational tidbits we learned on our visit: 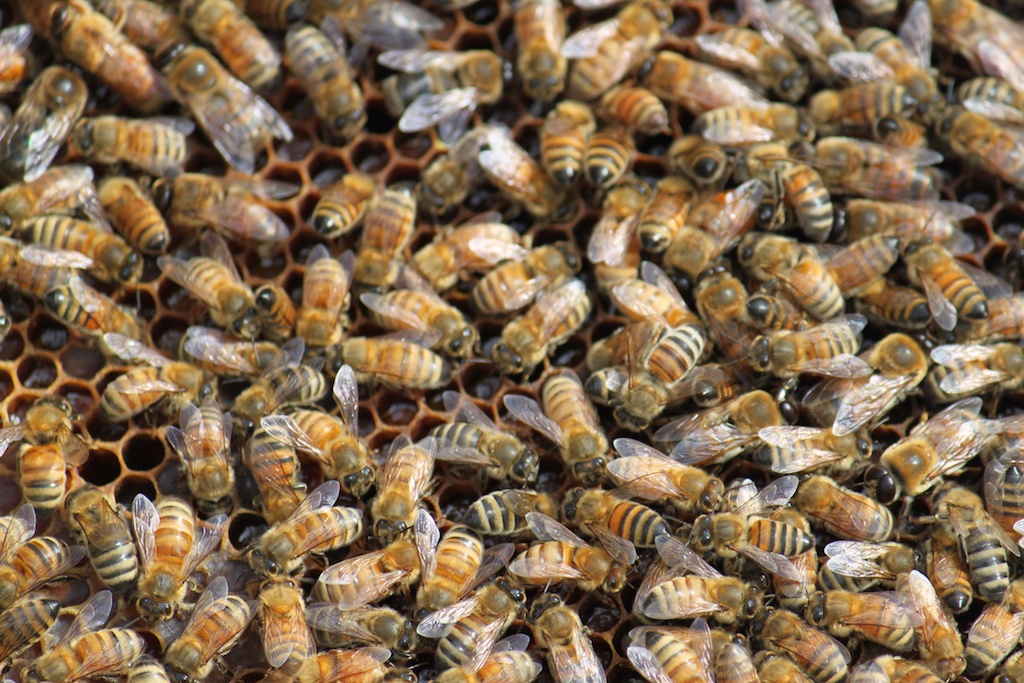 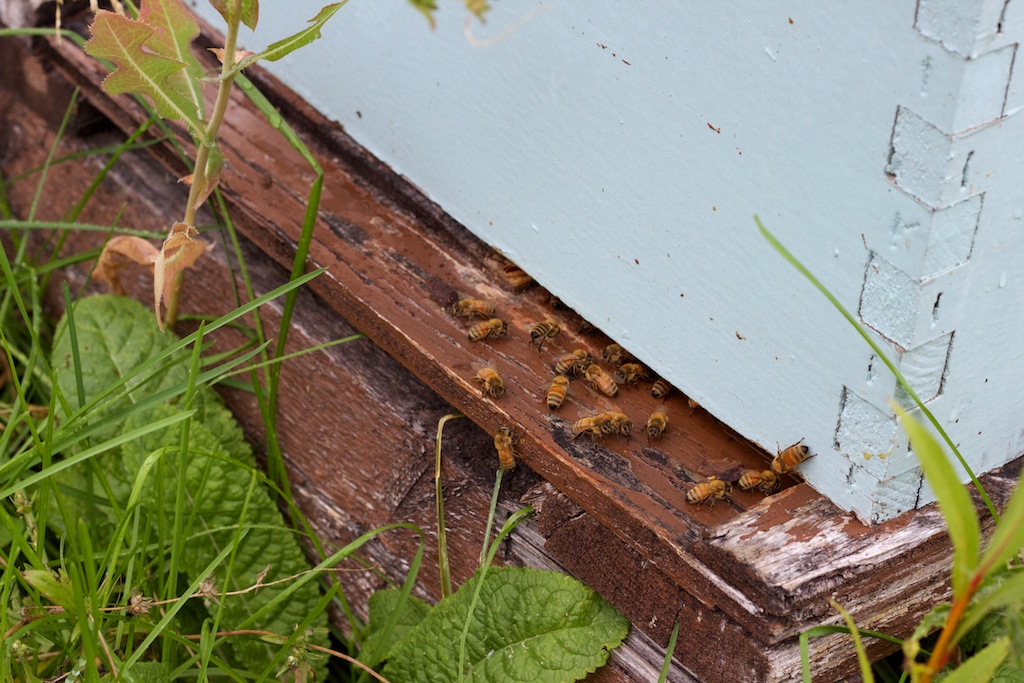 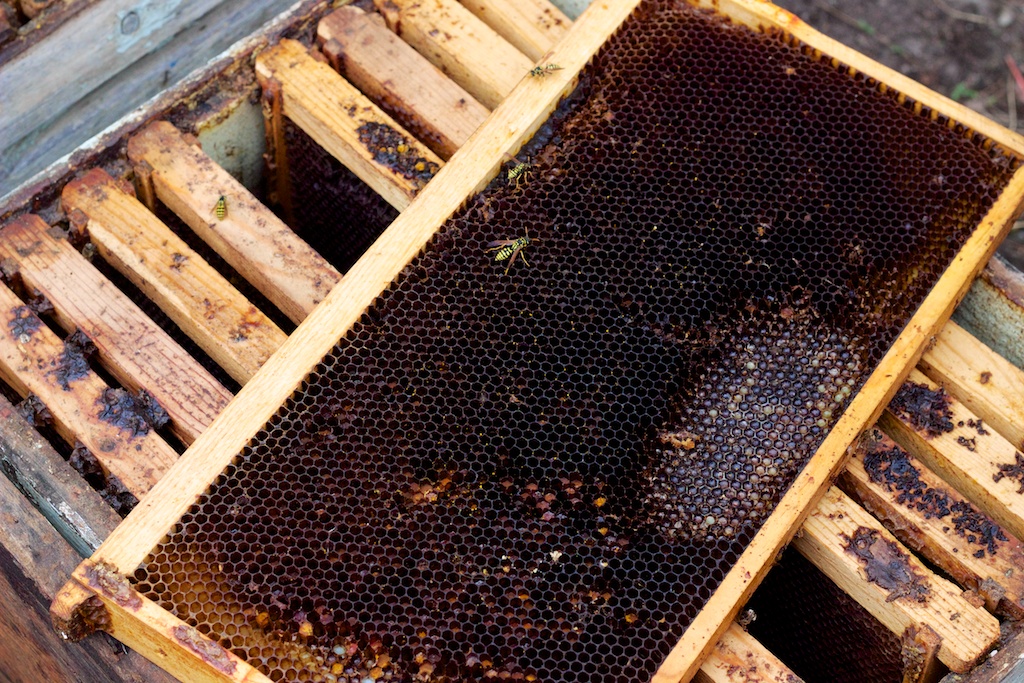 While this post isn’t about reviewing their products, I can’t help but tell you how delicious their honey, CaCysir, and especially their vinegars are. I’m sure to have their vinegars on my shelves for years to come. 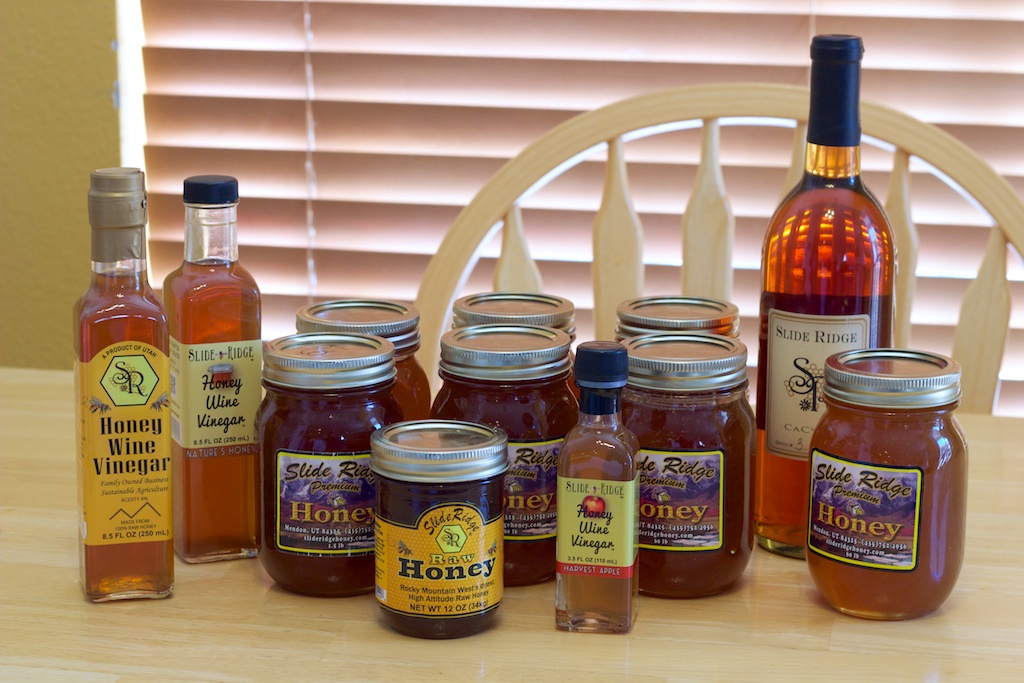 I’ve done quite a bit of experimenting with the vinegars and have found them delicious drizzled over fresh fruits, mixed into doughs and sauces, as salad toppings, atop ice cream, and mixed in a pork or chicken marinade. I’ve also mixed them in with my teas and other drinks. They add a nice flavorful kick.

The cyser was very sweet but delicious; for me, it was best in small quantities. You can also use it (it’s expensive) to deglaze your pans and make an amazing sauce or pork drizzle.