AAACHOOOO!!! My conversation was cut short as I hastily whipped my head to the left and brought up my arm just in time to block my sneeze before covering the lady two feet in front of me with a goobery barrage of Chris germs. “¡Perdóneme!” I said while fervently searching my pockets for anything to wipe my nose with. I had inconveniently used the last of my tissue paper just minutes before. The only option was to keep my arm up in front of my face; to bring it down would mean displaying to the world the inner workings of my nasal cavity.

The sneeze had made my eyes water, adding to their itchy redness. “I’m not sick,” I hastily commented. “It’s just allergies; they’re killing me!”

The lady backed behind her entry-way door, sure that I was sick and contagious. “Then you should chew some beeswax,” she hastily replied. Though my arm still covered my face, our eyes made brief contact. Hers said, “Duh!” and mine said, “Are you crazy?”

The notion of chewing beeswax to cure allergies seemed preposterous to me—so preposterous, in fact, that I have never forgotten it. That was 10 years ago in Ipala, Guatemala, and I could still take you to the exact door where I sneezed. Not that it really matters (it was red, by the way), but it’s fun to think about visiting my old sneezing grounds. It’s almost like marking my territory, but we won’t go there. Moving on…

Tell me if this sounds familiar to you: Nearly everywhere I’ve lived I get allergies either in the Spring or the Fall, and I have them for about 2 months of the year. During these two months I get little to no sleep, our toilet paper supply dwindles in unbelief, my nose randomly drips (sometimes without warning—embarrassing!), and I sneeze at the flap of a butterfly wing. I go to work and everybody avoids me because they think I have a cold—I can see the fear in their eyes. My eyes are red and my skin is extra sensitive and itchy. This sounding familiar to you yet? Like you’ve been there and done that?

Not wanting to pop any additional allergy pills this year, I decided to put beeswax to the test. Lucky for me, I have a co-worker named Mike who maintains a wild bee population. (He is also the creator of Alternative Health Life, a website dedicated to promoting a natural, healthy lifestyle.) Thanks to Mike I’ve been able to do a 7-day Beeswax challenge which produced some pretty interesting results. I recorded my experiences through the 7 days and you can read my observations and conclusion below.

Extra Note: This is not an official study of beeswax vs. allergies, just simple observations. As a biology graduate, I should be ashamed of myself. But I’m not. Each time I refer to chewing beeswax, I chewed an approximate 1 tablespoon amount (2 tablespoons a day). I used a mixture of locally harvested crushed beeswax and wild honey.

I woke up this morning with severe allergies, nearly emptying 1/2 a roll of toilet paper in 30 minutes with my boogs. I left for work and arrived in a sneezy mess and found, in a small Mason jar, beeswax on my desk (thanks Mike, just in time!). I wasn’t sure what it was at first. I thought one of my co-workers might be playing a trick on me by leaving some pickled onions or garlic on my desk. Nobody was around so I unscrewed the lid and took a sniff. That didn’t reveal anything though as my nose was clogged and dripping (yes, it can do both at once). The only thing I could do was taste it, so I did, and was relieved to know it was actually crushed honeycomb mixed with honey.

Honeycomb is super-functional bee spit (no need to glorify it, right?) that honeybees use to store their honey and larvae. Needless to say, it took some courage to put it in my mouth, but put it in my mouth I did. Miraculously within 10 minutes my sneezing and runny nose was gone. Strange, I know.

My allergies came back when I attended a BBQ for lunch a couple hours later. Across the street and upwind of us was a large weed field with some construction going on. My allergies came back with a vengeance… lucky I came with a handy supply of tissues. Upon arriving again to the office I chewed on some beeswax. Again after 10 minutes my sneezing and runny nose subsided. This lasted until 6:30 p.m., about 6 hours.

My allergies are typically an all-day affair, so it would appear that the beeswax theory may hold some weight (at least for today). I was pretty much symptom free for a few hours after chewing it each time.

Around 11:30 I was still sneezing and blowing my nose from my earlier outing and so, after drinking a Coke, I chewed on some more beeswax. Within 10 minutes of sticking it into my mouth my sneezing stopped. My nose dribbled here and there for another 15 minutes or so but then stopped. Wanting to know what would happen if I stepped back outside again, I took a quick breather in the sun and found that my allergies started again within minutes, though not quite as vehemently as earlier. Before it got too bad, I came back inside where I remained until go-home time.

From my observations today, it appears that the beeswax again is effective at clearing up my allergies, but is not effective in preventing them. I imagine if it’s going to be effective in preventing them, that I will have to chew beeswax for a longer period of time (not just 2 days… more like 2 months) to help my body build an immunity to the soon-to-be antigens contained therein. At this point, I’m thinking it my be more of a placebo effect… perhaps it is…perhaps it isn’t. If it is, it’s one heck of a great placebo.

Beeswax. This stuff is weird.

Beeswax is complicated. I forgot to take it into work with me today and I’ve been sneezing and blowing my nose all day. When I came home around 3:30, I decided to chew on some and my runny nose and sneezing went away within the next 10 minutes, but only for about 3 hours. What in the heck? My coworker (not Mike) said that he had his family try some but it did diddly-squat for them.

Surprisingly I slept like a log last night. No sneezing, no waking up a gazillion times to blow my nose. No dreaming that I was a piece of steak (yes, I’ve done that). My allergies haven’t been too bad at all today. A couple times I’ve had to blow my nose and itch my eyes, but not too bad. I’ve decided that I will still chew the beeswax today and see what happens. Maybe when I’m not experiencing them, I will end up getting them because of it. The results? Nothing spectacular. I stayed relatively allergy-free most of the day.

In a nutshell, I didn’t chew on any beeswax at all today and had killer allergies all day long. I think I depleted our double-roll toilet paper supply by at least half. Miserable.

Boogers. Lots of boogers. And lots of boogers means another sleepless night. I had orange & apple-cinnamon biscuits for breakfast this morning (recipe coming soon), and I chewed beeswax for dessert. It looks like it’s doing a pretty good job. I haven’t sneezed since, and have only blowed my nose once in the last hour. Very nice. Unfortunately though I ran out of beeswax after today’s first dose. 🙁 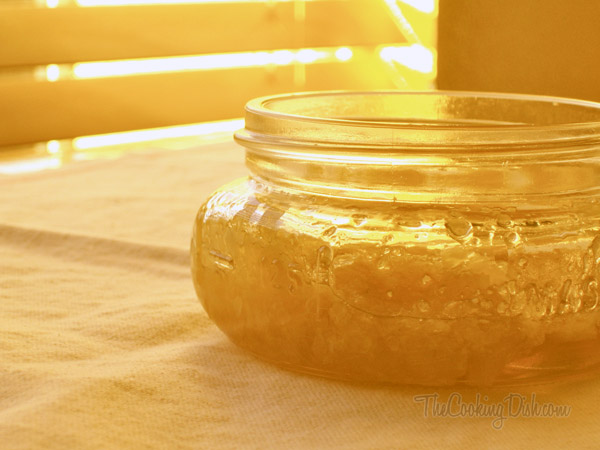 At this point, I’m having a hard hard time deciding how effective ‘beeswax therapy’ was for me. I lean toward it being an effective way to get rid of allergies, at least momentarily–even if it was just the placebo effect. Chewing beeswax did seem to clear up my symptoms most of the time.

There are a few things you ought to know about chewing beeswax.

So Why Chew Beeswax?

I probably should have mentioned this earlier (like introduction earlier), but the concept behind chewing beeswax for allergies is the same as receiving a vaccine to prevent an illness. By chewing the beeswax, with or without the honey, your body is introduced to small amounts of the allergen and your immune system creates antibodies to protect against them without actually causing the allergy symptoms. Later when the big, bad allergens invade your body, your immune system has already produced enough antibodies to kick the allergens’ butts and prevent you from gettings sick. Pretty nice, huh?

Ideally speaking, you want to be given the vaccine for an illness before you’re actually infected, right? It’s the same with beeswax. The greatest results ought to be produced by chewing the beeswax before allergy season starts. If I can get myself enough beeswax before next allergy season, I plan to do just that. I figure it ought to take around 120 tablespoons (nearly 2 quarts), and that I should start chewing 60 days before my allergies typically begin. If you can, snag the beeswax from a local beekeeper that harvests wild honey (as opposed to a bee farm), as the local swarm will have harvested pollen from all the local plants that give you the allergies. A bee farm’s bee swarms (even if local) may have only harvested pollen from a controlled plant population. This depends on the bee farm, so check with them first.

Okay, that’s all from me. I’d love to hear your thoughts on this subject!